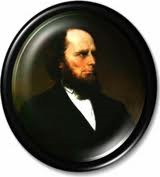 This means then that God is not a bully, ruling us just because He has the power to do so. There is a compelling reason for Him to govern and for us to obey. We need God, and we cannot get along without Him and His moral authority!

But, base government on anything else than the necessity of government for the good of all, and rulers will see no limit to their authority. Look at the parade of history. Kings, generals, Caesars, prelates, emperors march through its pages. How many of them ruled for the good of the people? How many followed the principle that their right to rule went no farther than the people’s actual need for their rule?

Look at the sad record. From ancient Nimrod to this evening’s news we see a long line of monarchs, tyrants and demagogues ruling for their own ends on the basis of power and might. Only now and then will you find a ruler who governs truly for the highest good of the people and who limits his power by the actual requirements of the people.

In contrast, let us look at the majestic moral government of God.

And God is fulfilling His moral obligation to govern. God’s sovereignty is being directed by His infinite love and wisdom. In all that He does, God is guided by His determined purpose to secure our greatest good and His highest glory by the best, wisest and most just means possible. Truly, “God is love” (1 John 4:8).

Continued at “IT ALL ADDS UP TO LOVE… Where Do I Fit In?”

All rights reserved, including the right to grant the following permission and to prohibit the misuse thereof:
The Author hereby grants permission to reproduce the text of this book, without changes or alterations, for non-commercial distribution for ministry purposes.