IT ALL ADDS UP TO LOVE… Where Do I Fit In? 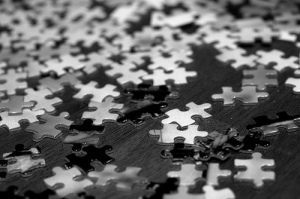 Most people do not like it. They do everything possible to avoid it. They deny it. They throw it onto someone else. They try to escape it personally by spreading it over society collectively. It challenges them and makes them uncomfortable.

What is it? Personal moral responsibility!

One school of psychology says that man is only a machine (and who ever heard of a machine being morally responsible for anything?). Stimulus-response associationism places all the blame on in-coming stimuli (“society made me do it; my social and physical environment stimulated me, and I had to respond the way I did. I am a victim.”).

Maybe it is heredity (“it’s my glands, you know”); or parental influences (“my mother dominated me as a child”). Sometimes it sounds theological (“it’s my sinful nature”); or religious (“the devil made me do it”).

You name it; somebody has thought of it.

Of course, many things influence us or appeal to us. But they do not make us do anything. The choice is still ours. We are not the product of these influences unless we choose to be.

We are more than machines or animals. Our thoughts, feelings, attitudes, values, hopes, joys, sorrows, and affections are not just complex electro-chemical processes. There is a spiritual part of our being that is uniquely human. One of its functions is the power of intelligent, self-determined choice–choice either in conformity with reason or in opposition to reason. And because these choices are self-generated, we are personally responsible for them. We are morally obligated to choose intelligently in conformity with the will and Word of God.

THE CONDITIONS OF MORAL OBLIGATION

“The attributes of moral agency are intellect, sensibility and free will.

“Free-will is… the power of choosing, or refusing to choose,… in compliance with moral obligation.

“Unless the will is free, man has no freedom; and if he has no freedom, he is not a moral agent, that is, he is incapable of moral action and also of moral character.”

So then, to be capable of responsible choices one must have (1) a functioning intellect, (2) feelings by which we are aware that happiness is valuable (whether our own happiness or the happiness of others), and (3) the ability to choose without coercion. These three capacities make a person a moral agent.

But before our choices can have real moral character, we must have something else:

“A second condition of moral obligation is light, or so much knowledge of our moral relations as to develop the idea of oughtness.”

We must realize what is valuable in itself and that we ought to choose it because it is valuable in itself. The moment that we realize that God’s happiness is supremely valuable and that the happiness of others is just as valuable as our own, we have light. We know what we ought to live for, and therefore we come under moral obligation to love God with all our heart and our neighbor as ourselves. The more we understand how to please God and do good to others, and how our words and actions affect others in practical every day living, the greater is our light.

We human beings know right from wrong because we know the valuable. That is, we know what we ought to live for and we know whether or not we are living for it.

We start by eliminating the things that are not directly under moral obligation.

Physical action is neither right nor wrong in itself. The right or wrong is in the motive for choosing to act in a given situation. And some bodily actions are purely reflexive, with no deliberate choices or purposes behind them.

At the instant the choice is made in the heart, moral character is determined, whether a person has the opportunity to carry the choice out into practice or not.

When does a person become a murderer? When he pulls the trigger, or when the decision was made to do the deed? The answer is obvious–the person became guilty of murder the instant the decision was made (see 1 John 3:15). And so Jesus taught us “That whosoever looketh on a woman to lust after her hath committed adultery with her already in his heart” (Matt. 5:28).

Feelings also are not directly under moral obligation. They are not directly within our power of choice. For that reason our moral character does not depend upon how we feel. It does depend, though, on what we do with our feelings. More about this later.

So then, if we really love God, we will live for Him. If we refuse to obey Him, we do not love Him.

We might experience certain sentiments about Him or toward Him. But these in themselves are involuntary and have no moral character. Our moral character is determined not by how we feel but by what we are living for!

Suppose you walk up to a friend at O’Hare International Airport in Chicago:

“Well, hello there, Mike. Getting ready for another ride on the DC-8, eh? Where to this time?”

“New York City? Then how come your ticket is for Los Angeles?”

And so Glen walks slowly away, muttering to himself, “Poor Mike. He’s flipped. He’s really flipped.”

What was Mike’s real goal? It was the one he was knowingly using means to secure, not the one he professed.

“Men are to be judged by their motives, that is, by their designs, intentions …. If a man intend evil, though perchance he may do us good, we do not excuse him …. So if he intend to do us good and perchance do us evil, we do not and cannot condemn him …. He may be to blame for other things connected with the affair. He may have come to our help too late … but for a sincere and of course hearty endeavor to do us good he is not culpable ….

In fact, 1 Corinthians 13:3 informs us that it is possible to give all one’s goods to feed the poor and to give one’s body to be burned, and to have it all amount to nothing in the sight of God if the motive is wrong.

“Now the proximate ends, or immediate objects of pursuit, in these two cases are precisely alike, while their ultimate ends are entirely opposite. Their first or nearest end is to get wages. Their next end is to obtain books; and so we follow them until we ascertain their ultimate end before we learn the moral character of what they are doing…. One is selfish and the other benevolent.”

Now, before we can choose means and exert actions intelligently, we must first choose an end. It is the choice of an end that sets moral action in motion. In fact, it can be said that the choice of an ultimate end or purpose in life is the great moral action. All others flow from it.

Once the ultimate goal or end has been chosen by a moral agent, the will immediately embraces all the known available means to obtain that end and generates actions accordingly. This is unavoidable. The choice of a supreme object automatically sets a moral agent in motion toward securing that object. And please notice, it is the choice of a supreme object, not just the recognition, admiration, or desire of an object.

A river system is a good illustration. Each drop of water finds its way into a rivulet, each rivulet into a creek, each creek into a tributary river, each tributary river into the main course. Finally, everything surges past the mouth of the mighty river to its end or goal–the ocean.

Choice is the same way. Every intelligent and meaningful choice contributes directly or indirectly toward securing the great ultimate goal of the moral agent.

And there are only two ultimate ends to choose from. One is “the highest well-being of God and the universe,” that is, God first, and our neighbor as ourselves. The other is self. There is no other mode of moral action. As ultimate objects, the two are mutually exclusive, antithetical, antagonistic.

So if Jesus Christ is not occupying first place in the heart, it is for one reason and one reason only: self has usurped the throne and is ruling there.

For this reason right thoughts, actions and even feelings are required by the moral law because a right heart will produce them under normal conditions.

On the other hand, if thoughts, actions, and even feelings that seem to be good and righteous proceed from a selfish ultimate motive, there is no real virtue in them.

“Sinners do many things outwardly which the law of God requires. Now unless the intention decides the character of these acts, they must be regarded as really virtuous. But when the intention is found to be selfish, then it is ascertained that they are sinful ….

“Moral obligation then indirectly extends to everything about us over which the will has direct or indirect control.

“We speak of thought, feeling and action as holy or unholy. By this, however, all men really mean that the agent is holy or unholy, is praiseworthy or blameworthy in his exercises and actions, because they regard them as proceeding from the state or attitude of the will.”

All rights reserved, including the right to grant the following permission and to prohibit the misuse thereof:
The Author hereby grants permission to reproduce the text of this book, without changes or alterations, for non-commercial distribution for ministry purposes.

2 Responses to IT ALL ADDS UP TO LOVE… Where Do I Fit In?